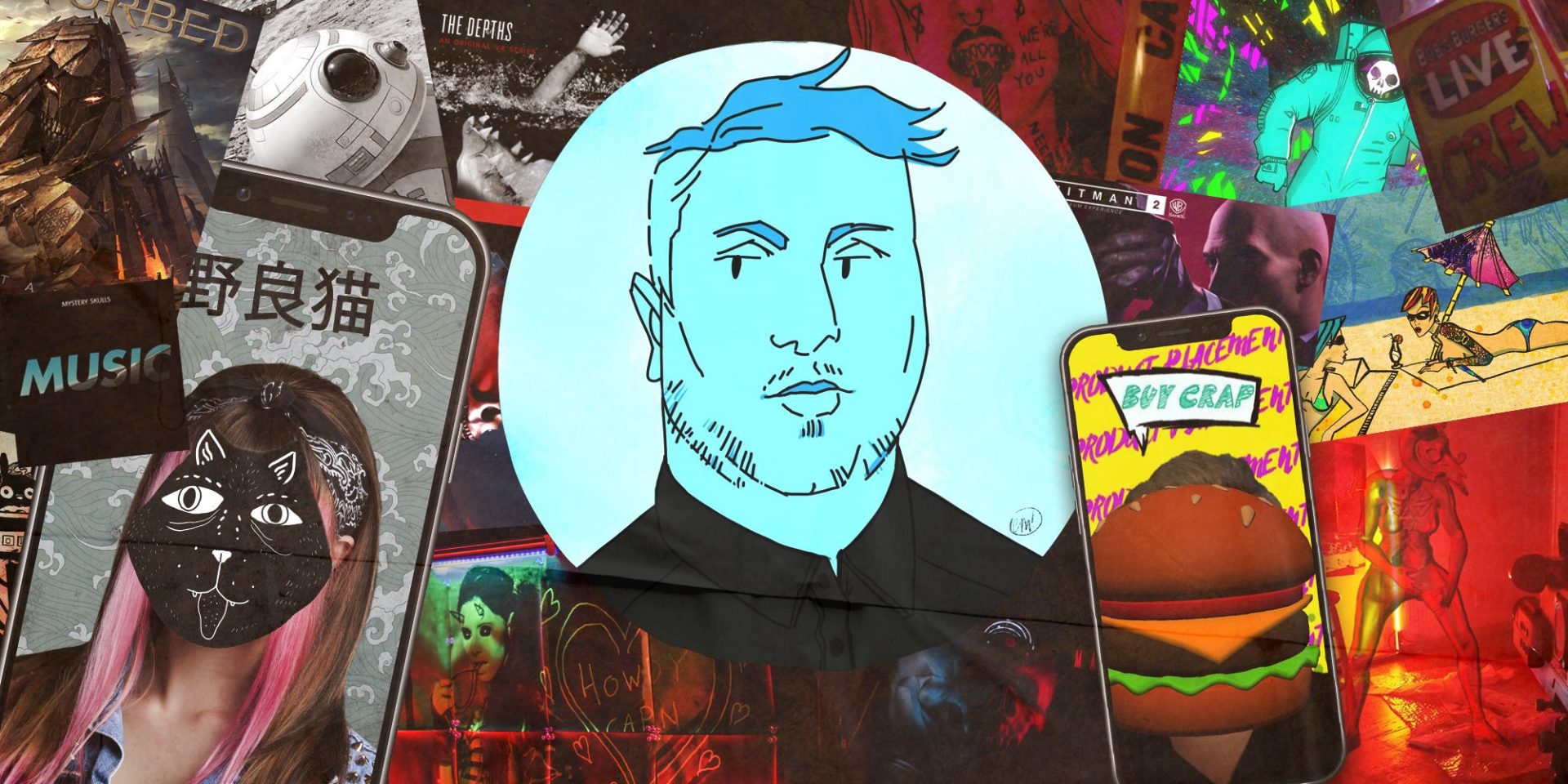 A collection of recent work by Dekker Dreyer — Illustrated portrait of Dekker by Emmett Helen, cover artist for Rick and Morty, Oni Press.

The traditional media world demands that we reduce our artistic output to a short string of adjectives that fit neatly on a 3.5 inch business card. Everything that artists like myself do throws this notion into chaos.

I see an email I missed from earlier. It confirms that NASA is going to participate in a panel I’m planning at Slamdance DIG (digital, interactive, and gaming) — this year I’m an organizer. It’s 4am and I’m looking out across Hollywood excited for the possibilities. I’m one of a new wave of creators that’s merging interactivity, virtual reality, filmmaking, and live events into a hard-to-explain jumble of an art scene. It feels like I’m working twenty or more hours a day and I feel alive.

This week I’m launching an interactive animated film called Joy Ride with BroomX, a company in Europe that outfits spaces like hotels with 360 degree immersive projectors. Audiences will experience Joy Ride exclusively in this full room projection format at partner locations like Catalonia Hotels. I’ve never worked in this format before because it didn’t exist until a little over a year ago. This kind of shoot first, ask questions later approach is indicative of not just the kind of work that I produce, but the landscape of how immersive content is made. It’s a challenging laboratory of exotic platforms in unexpected locations — creators are one part theme park engineer and one part film director. Each project seems to have its own quirks that are completely different from the last. It’s the wild west, but at the same time it’s just how things are now. I can’t imagine settling on a set of guidelines. It’s always about each project being bigger and more engaging.

The traditional media world demands that we reduce our artistic output to a short string of adjectives that fit neatly on a 3.5 inch business card. Everything that artists like myself do throws this notion into chaos. A few years ago I put the television landscape on the backburner and moved squarely into the immersive media universe. I started a production company called Clever Fox with my wife and partner Julia Howe. Since then I’ve bounced between creating augmented reality touring shows like the 80’s set horror experience The Summoning, virtual reality interactive experiences, 360 degree documentaries and shorts, music videos, apparel, feature films, snapchat lenses, even original lenticular art prints that now live with buyers like Bob Odenkirk. My work has been experienced by millions of people, but the natural high of this falls apart when I’m asked what I do for a living. “A little bit of everything,” I say, shrugging my shoulders. I have no clear answer to give. The inevitable follow-up conversation where I frantically try to connect the collectable VHS release of my feature film The Arcadian, my work with special FX houses, theme parks, and even building an interactive spy museum for the video game Hitman 2 comes off sounding more like a lunatic conspiracy theory than a CV.

I know that the predominant school of thought is that you can either do one thing very well or you can do several things half-assed. My generation of creators flies in the face of this by embracing one of the key facts of 21st century life — that you’re required to be a life-long learner.

I know that the predominant school of thought is that you can either do one thing very well or you can do several things half-assed. My generation of creators flies in the face of this by embracing one of the key facts of 21st century life — that you’re required to be a life-long learner. If you don’t evolve you’ll become unemployable and obsolete. The tangible effect of this economic reality is that you’re going to breed a generation of polymaths. It also helps that we’re mostly digital natives, so that we can take the rapid pace of changing technology in stride.

The best way to explain this is to get a little nostalgic. I’m old enough to remember a world where computers filled giant office buildings instead of fitting snugly in your pants pockets, but I never worked in that world. I never sat at a drafting table and got my hands covered in ink or had to load film into a motion picture camera unless those were specific creative choices. In my professional life the computer and I developed together. I made my first animated short at age 12. It was created on a Wacom ArtPad II with software called Fractal Design Sketcher; I’d rotoscope footage that I recorded frame by frame using an underpowered video capture card and my VCR. At 13 I was building virtual reality worlds (VRML) and cg models with Caligari Truespace. I still use a Wacom drawing tablet, it’s just much larger, and my VCR has been replaced by Adobe Premiere and SD Cards. I’ve traded Truespace for newer programs like Maya, Unity, and Mudbox, but fundamentally my workflow hasn’t evolved much since before I could drive. My first real film was a short called Closed Circuit, which was commissioned by Miramax the year I turned 21. It was shot on digital 8 video specifically to be shown online as a sidecar project to the feature film Naqoyqatsi. This was four years before youtube bought their domain name. We can talk all day about how new and exciting digital media is, but for artists like myself we’ve been waiting a quarter century for the world to catch up.