A most memorable short film from Slamdance 2019. As one programmer put it, "the commitment to dumb-assery is pretty profound."

Slamdance:  So why did you make this? 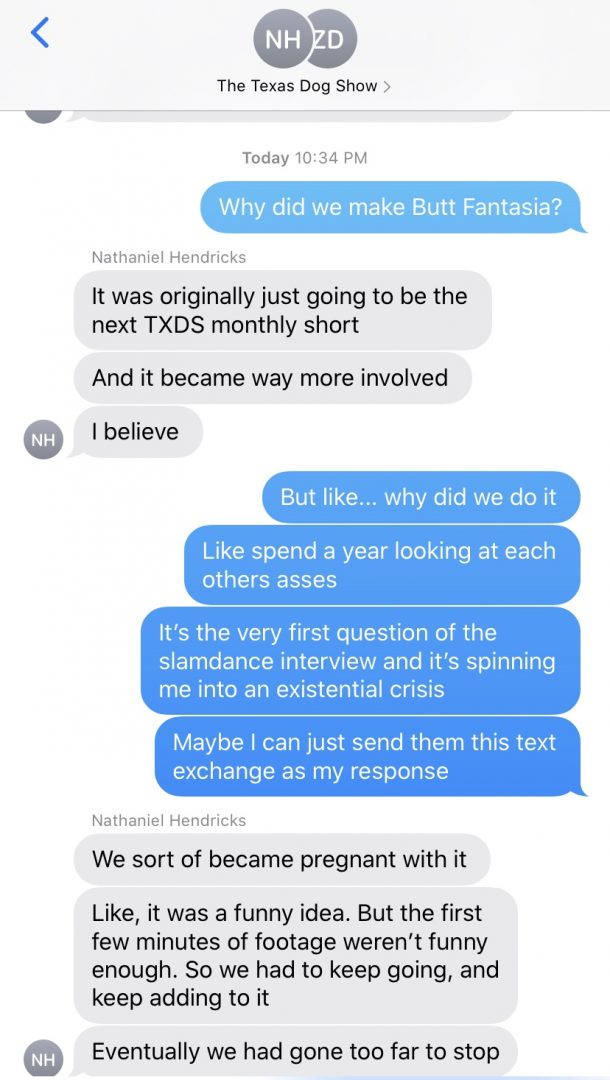 Tell us a little about the process of making it. Was it hard to convince all these people to show their butts?

I created this film with Nathaniel Hendricks and Zach DeSutter. We are in a sketch video troupe called The Texas Dog Show. We were trying to film one sketch a month when we first started. Butt Fantasia was about the sixth and final short-a-month. It took us a year to make, about 1-4 months per set piece. The three of us did every crew role behind the camera, learning as we went along. This was the first time any of us had tried to make a miniature set for instance. I learned how to use a camera and light scenes while making this film.

It was a bit difficult to find people willing to act in it at first. People were understandably weirded out. We actually made a genuine craigslist ad asking people to let us film their butts, reassuring them that it is “not porn.” Nobody replied back. I believe what helped us the most was acting in it  ourselves to show people exactly what it would look like, and that we weren’t trying to take advantage of anyone. I did my best to keep a safe environment for the days with multiple actors. I tried to check in often to make sure everyone felt comfortable and happy. This is necessary for all productions but especially for something like Butt Fantasia. 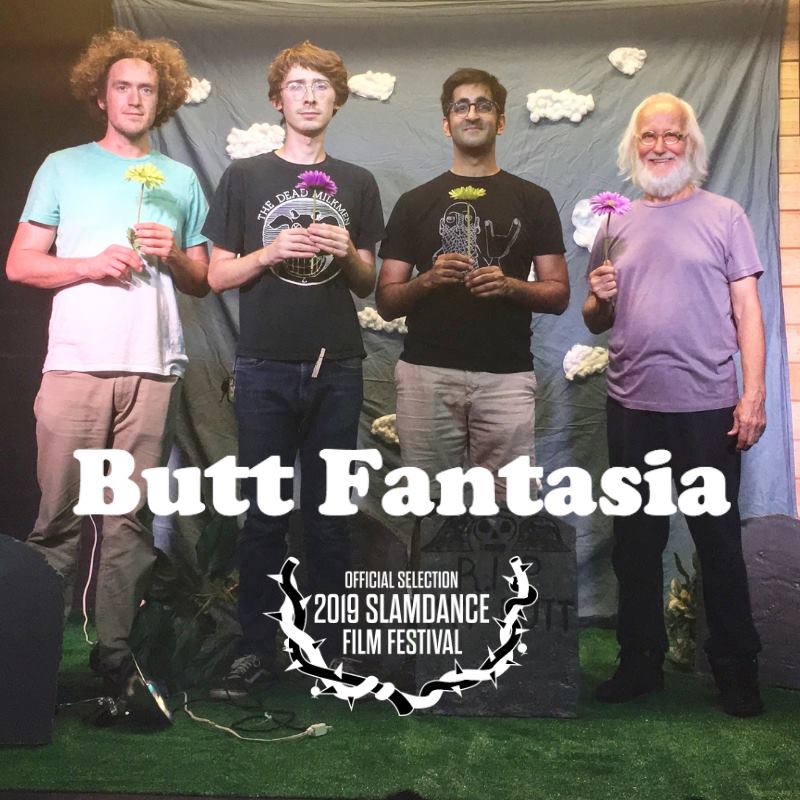 Why are you the only people who could tell this story? How does Butt Fantasia reflect your overall style and interests as a director?

Nathaniel came up with the title “Butt Fantasia” which made us ask ourselves “ok well what the hell does that movie look like?” I can’t say why we were the only people to make this but I think all three of us are driven but a stubborn curiosity to see these dumb ideas come to life.

I used to make a lot of music videos. which gave me a sense of quick rhythm and timing that is also in Butt Fantasia. The intention was to make you feel like you’re on a roller coaster, always a bit off balance, unsure of where the movie will turn next. I think that’s a fun place to play with humor and suspense.

I don’t think there are too many films with this many butts in them, which is probably partly why it resonated with our programmers so much. How has it been received outside of Slamdance?

It had a great run! It played several different festivals including Fantastic Fest, Chattanooga Film Fest, Sidewalk and Cucalorus Film Festival to name a few. It’s honestly relieving to know there are other weirdos out there that find this idea funny.

What advice to you have for other filmmakers wanting to make films about butts, or other out there subject matter?

Make the movie for yourself first. I’ve been rejected countless times with films I thought for sure would get in, but this is the first time  that I didn’t think about where it would go after it was finished. I assumed it would only be seen by my friends so that was the audience I tried to make laugh. Focusing only on what we find funny or interesting freed us to make the movie as weird as it needed to be.

What are you working on now/next?

Nathaniel and Zach recently finished their feature film Ultimate World.
I finished two feature films with Redd Jefferson— Garbage and Night On Sixth.  We’re in production for a few more in 2020 as well. I’m basically trying to do the one sketch a month idea with feature length stories, perhaps one no-budget feature film every 6-8 months until we figure it out. These films tend to be more personal, focusing primarily on character and emotion. More emphasis on the soul, less emphasis on the butt.

What are you currently obsessed with? Besides butts.

Cooking with cauliflower, jiu jitsu, not being able to stop myself or my loved ones from getting older, my cat’s furry face.

What song can you not stop listening to?

Do you have a favorite butt? (Inside or outside the film)

Inside the film- The helicopter pilot always makes me laugh.

Outside the film- There is a wrestler in All Elite Wrestling named Sonny Kiss. He has a very powerful butt. He hypnotizes his opponents with his twerking abilities, and occasionally tosses them into a corner, clobbering them to near unconsciousness with his powerful butt muscles. The move is called “kiss my sass”.

I love Queer Eye In Japan. Such a wholesome show!

What’s one thing you are dying to try?

I’ve wanted to make a pro wrestling melodrama for years and I won’t shut up about it.

Slamdance TV highlights a short film from the festival every month. Check back soon for our next featured film!