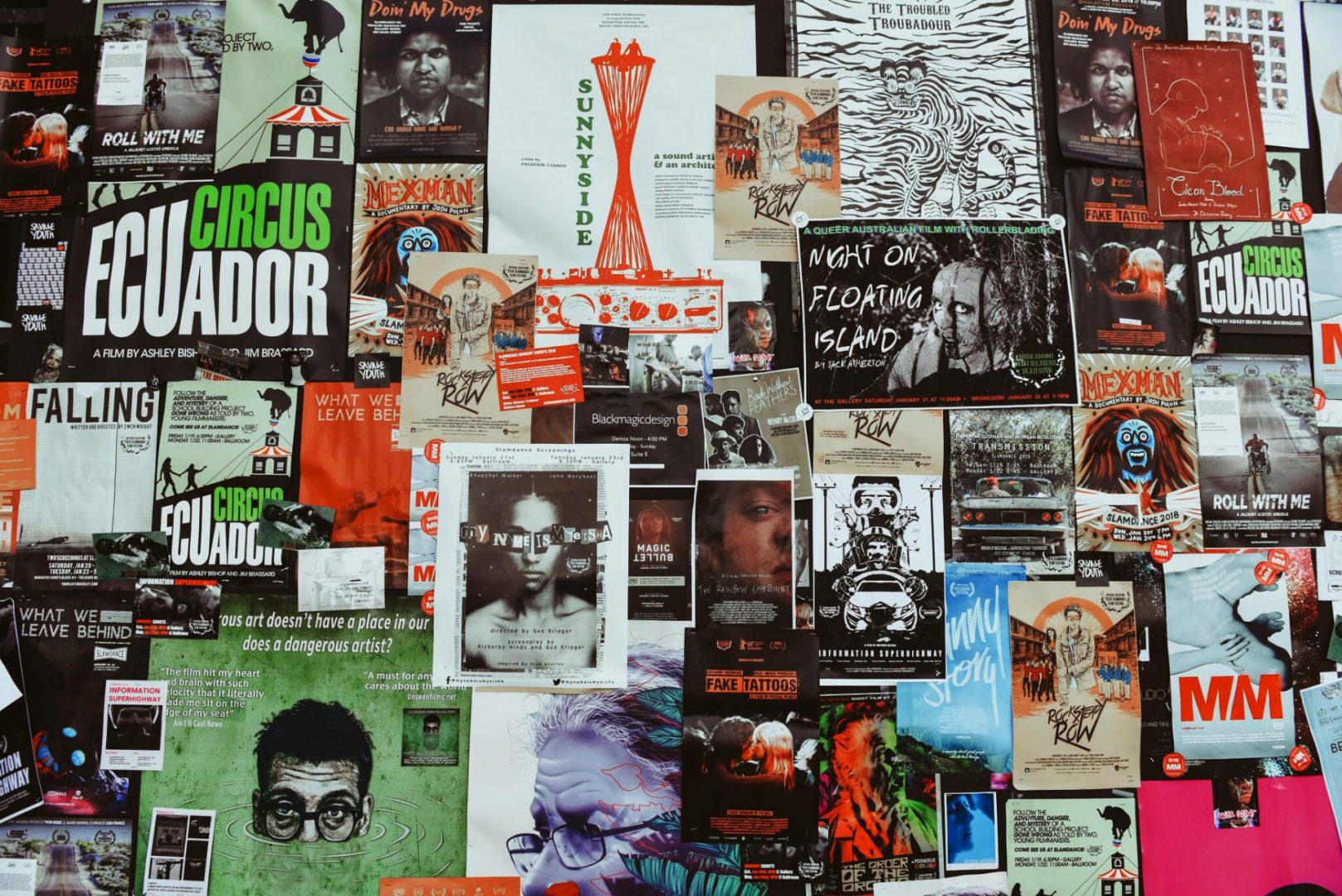 We know the festival submission process can seem pretty mysterious and we want to make submitting to Slamdance a little more transparent. As our motto proclaims, we are filmmakers here to help fellow filmmakers. Most of us are alumni of the festival who have been in your shoes—confused and nervous about navigating the festival circuit with our first films. Somehow, through some combination of grit and magic, we are now on the other side as Slamdance programmers! We’ve been there, and we’ve been here, and we want to help.

How programming works at Slamdance

“No one programs a film at Slamdance. We all do. Often messy, uneasy and always passionate, it’s the fairest process we know. “ — Peter B. (Narrative Features)

Here are some tips and insights from members of our programming team about what we love to see, how we program, and everything else in between. Read on to get a peek inside the minds behind the 2019 Slamdance Film Festival.

“Roger Ebert had a great quote: “It’s not what a film is about, but how it’s about it.” Most films are about a subject in the same way a lot of other films are, and as a consequence they are forgettable. Ask yourself how your film is about its subject, and don’t be satisfied with an easy answer.”

“In order for your film to get programmed, at least one person on the programming team has to LOVE it. It has to be their favorite — so that they’ll fight for it and rally support for it. The converse is also true — if your film is really good but nobody loves it, the chances that it will get programmed diminish. If I can get the film I love programmed, it’s likely that I will understand and support another programmer’s favorite film even if I don’t necessarily respond to it, because I will respond to their passion.” — Blake R. (Narrative Features)

“Most films fail at the “let’s make a film about…” phase. Most of the rest fail during the development of that concept. In most cases, it seems like the filmmakers didn’t challenge themselves hard enough to make something unique and vital. Roger Ebert had a great quote: “It’s not what a film is about, but how it’s about it.” Most films are about a subject in the same way a lot of other films are, and as a consequence they are forgettable. Ask yourself how your film is about its subject, and don’t be satisfied with an easy answer. Push yourself to make something unusual, specific, and meaningful.” —Randall G. (Experimental, Animation and Narrative Shorts)

“MAKE IT UNIQUE. Might be a good topic, but not a very imaginative approach. I want to encourage you to do something risky, something more “out there” and I’ll love seeing that in between all the “regular”stuff. Be aware that there are TONS of filmmakers out there. Don’t underestimate your “competition.”— Sandra B. (Documentary Shorts)

“If you are in film school, try to make something radically different from the types of films produced in that school.” — Anonymous

“Being genuinely surprised by a short is becoming one of the qualities I’m most excited — and often convinced by. I don’t mean clever twist endings, but an overall feeling of unexpectedness in short-storytelling.” — Sébastien S. (Narrative Shorts)

“If I watch a film that’s the SAME as yours, both films are out. If there’s two of something, it’s not original. Avoid politically-driven, unless you have the BEST version ever, and a fresh way for me to digest it.” —Patrick S. (Documentary Features)

On knowing your festival

“I think the most important thing to note is to know the festival you’re submitting to and their requirements before blindly submitting.” — Bryce F. (Narrative Features)

“My feature documentary film was officially selected in 2017, and I fell in love with the people at Slamdance. But before that, I fell in love with the “idea” of the festival itself. Punk rock. A true indy festival — untainted, and designed to break brand new talent— talent that gets a bit crazy (what Sundance used to be, before it started premiering TV sitcoms). That’s the brand I look to service while I’m programming. So—while I’m watching your documentary, in the back of my mind, I’m constantly saying: “Is this Slamdance?” And it’s easy to tell when something is, and isn’t.” —Patrick S. (Documentary Features)

“Films that get a high score from me: unique or thought-provoking storytelling; well-executed, nontraditional visual style; no glaring mistakes; no gender/racial/cultural stereotypes or offensive representations; weird stuff. I think it’s important to understand Slamdance’s mission, and how that relates to what films are ultimately chosen (for example, a Disney-like animation is likely not going to be accepted).” — Zachary Z. (Animation Shorts)

“Check out some of our past years programs! They are usually out of the box and one of a kind with their story and filmmaking.” —Sarineh G. (Narrative Shorts)

On the sweetness of shortness

“I think the most common issue I’ve encountered is filmmakers taking an interesting idea and stretching it out too long” — Cory B. (Documentary Features)

“The real question here is, “Do you think your film could be shorter? Should be shorter?” If you do, then please make it shorter. We all watch hundreds of hours of film. There’s nothing wrong with setting a mood or hitting an emotional beat, but sometimes filmmakers end up with a runtime that is right on the cusp between a short and a feature (say, 35 or 60 minutes long), and these can be difficult to program just from a logistical point of view. We will program things that are these lengths, but the films in question better be damn good. If you’re on the fence about whether to shorten things up or puff them out, aim to shorten them up. Get some outside perspective. Consider telling your story in a different way. Get in touch with the essence of what you’re trying to say and make sure everything you put on screen can be tied directly back to that essence. If the film is tight, doesn’t waste any time, and stays true to itself, then any length will work. When I programmed short films, I thought 12 minutes was the ideal length, but two of my favorite programmed shorts were 30 minutes long.” —Beth P. (Doc Features)

“Shorter is better, sometimes. I’m programming doc features and thought many of them would have made much better short subject films. There are plenty of subjects and topics that deserve or need 90+ minutes, but there are also plenty of topics that can be effectively covered in a much shorter format. I would rather watch a captivating 15-minute film than one that drags on for over an hour.” —Ashley S. (Doc Features)

“You don’t need a huge budget or fancy equipment to make an interesting film. It’s good for beginners to remember that, in my opinion” —Ashley S. (Doc Features)

“In this day and age, the technical elements have to be strong—it doesn’t cost that much money to make your film look and sound really good anymore (it takes talent). For me, the acting must be really strong. Too many films, even those with little to no resources will be very well executed. If yours isn’t it, will struggle in comparison. This doesn’t mean they have to be known or famous actors — they just have to be very believable performances that don’t pull me out of the story. As a filmmaker going into film festival submissions, be aware that we are seeing 100’s if not 1000’s of films. So in order to stand out you’ve got to turn all the realities of your filmmaking circumstance, even if its a lack of resources, into a positive for your film. I want to see a better film because of your circumstances not an inferior film. If you don’t achieve that someone else will.”— Blake R. (Narrative Features)

“Films with handsome cinematography, professional-level acting, and other ‘calling card’ attributes are extremely common. All of these things can be great, but they are nothing without unique development of a strong concept. And it’s far easier to forgive poor cinematography than a poor concept.” — Randall G.(Experimental, Animation, Narrative Shorts)

Don’t mind us, make what compels you.

“Don’t chase after what you think programmers might like, because at the end of the day, out of thousands of shorts, there will literally only be a handful that ALL the programmers agree on. The rest are varying degrees of “yes’s” and “no’s” so you’re just dealing with (what sage programmer Randall calls) “a bunch of asshole programmers with opinions.” No single programmer has the answers, but as a collective we become Slamdance.” —Shaun P. (Narrative Shorts)

“What should I be doing?” This is an unanswerable question — the universe is vast and wide and guidance is scant. With regard to finishing a film you hope to screen at Slamdance: you should be working on your film, digging into yourself, and finding something uncomfortably vulnerable or incendiary to share. You should remember that us programmers don’t hold any sort of real formula. The turnover in programmers, the inclusion of new voices every year, means that there’s no list of requirements to check off. Only vague advice that is nonetheless true: make something true to yourself, take risks, be unusual, but also please be technically competent in your work. Keep the audience in mind, and keep them challenged. —Beth P. (Doc Features)

“The bottom line for me is this: Sincerity and heart. When a project feels forced it loses its essence and its truth. I think that this is very important.” —Clementine L. (Narrative Features)

“I am inspired by your films every day. What I appreciate most about programming is getting a chance to hear you, see you, and better understand you through your creative projects. What I hope to impress upon anyone creating work that they plan to submit to a festival is, be authentic. Don’t try to make a film you think someone will like. Don’t try and improve upon someone else’s vision. Don’t choose a subject because it’s popular. Rather, I encourage you to make the film that only you can make. Be empowered to be as authentic to your vision as possible. Trust yourself. I assure you, you will find your audience. And I know I can’t wait to see your submission.” —Breven W. (Narrative Shorts)

Some Practical Tips for Sanity’s Sake (Yours, and Ours)